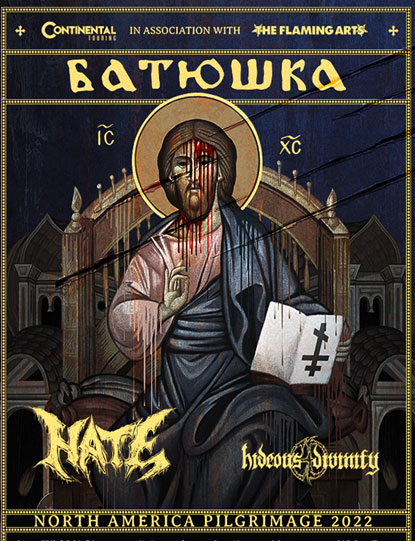 Batushka are a controversial Polish black metal band. Their music is drenched in imagery and texts from Eastern Orthodox Christianity with lyrics sung exclusively in Old Church Slavonic. Although it can’t be officially confirmed, they are banned from playing in Russia and Belarus. Pronounced “Batjushka,” the band’s name is spelled Батюшка in Cyrillic and means “father” in Eastern Orthodoxy (used to address a priest). Their songs contain lines of liturgical chanting backed by black metal instrumentation and aesthetics, and they dress in hooded robes. Despite claims by others that they’re blasphemous and anti-Christian, Batushka are ambiguous about this, though translators have claimed the band inverts the Judeo-Christian linguistic imagery to reflect the deification of the self, not God. Their universally acclaimed debut long-player, Litourgiya, was independently released in December 2015. Afterwards, the band splintered into two factions, each determined to use the name Batushka; the issue was mediated inconclusively in the courts and left both bands able to use the name legally. One, led by founding multi-instrumentalist Krzysztof Drabikowski, issued 2019’s acclaimed Requiem while the other, led by vocalist Bartłomiej Krysiuk (aka Bart), signed to Metal Blade and released Hospodi in 2019. In 2021, with no final decision to the name rights, Bart‘s version of Batushka independently released the five-track Raskol EP.