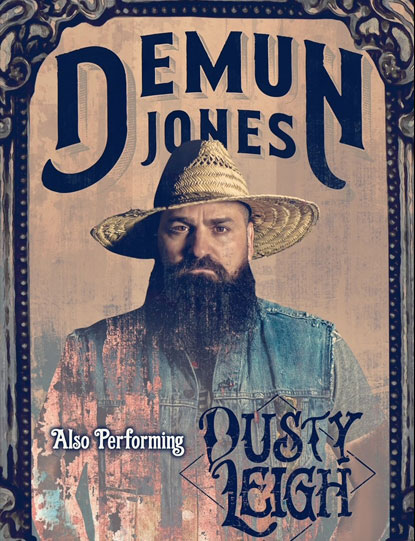 Jones County, Georgia’s Demun Jones is probably best known as the songwriting and singing replacement for Brooks Buford in the groundbreaking country and Southern rap duo Rehab. Born and raised in Jones County, which is located just north of Macon, Jones grew up absorbing all kinds of music, from country and Southern rock to Marvin Gaye and Motown, but it was discovering N.W.A. and rap when he was ten years old that really set him on his musical course. When Buford left Rehab, the other founding member, Danny Boone, kept the Rehab name and tabbed Jones to join him in a reconstituted version of the duo (which had actually grown into a quintet by this time), a spot Jones kept for the next ten years, contributing songs and vocals to 2005’s Graffiti the World and 2010’s Welcome Home. He released his first solo album, Jones Country, an impressive country/hip-hop set that chronicled life in his native Georgia, on Colt Ford‘s Average Joe label in the summer of 2014. Returning two years later with his follow-up LP, #Beast, Jones enlisted an all-star cast of Southern rap collaborators including the Lacs, Colt Ford, Big Smo, and Jelly Roll. A deluxe version of #Beast was released in early 2017, including eight remixed bonus tracks. The next year, Jones delivered a new full-length album called Jones in Ya Speaker, and a duet album with Upchurch called The Oven. Jones returned to his solo career for 2019’s Demun, which featured cameos by Long Cut, Struggle Jennings, and JJ & Sissy.