Kingdom Collapse, The Funerial Portrait, Versus Me 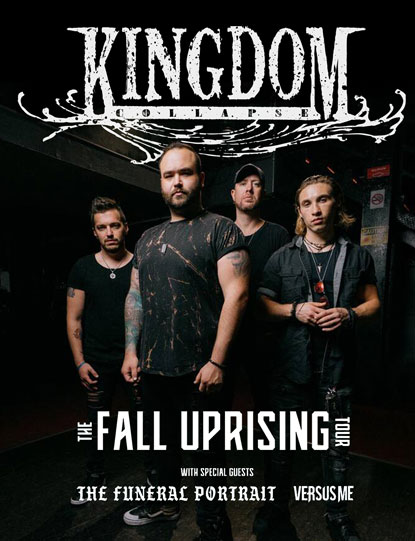 Based in San Antonio, Kingdom Collapse are a metalcore band whose strong melodicism helps their sound lean more toward hard rock. Although active since the mid-2010s, their audience grew significantly in the latter part of the decade, particularly with the release of 2018’s War Inside EP and subsequent singles.

Formed in 2013 by singer/guitarist Jonathan Norris, guitarist Robert Flores, bassist Blake Suarez, and drummer David Sanchez, the Texas quartet issued their first EP, Common Ground, in 2014 and began to establish themselves as a tight live unit, opening for bands like We Came as Romans and As I Lay Dying. Riff-heavy with melodic choruses and punishing breakdowns, Kingdom Collapse continued to dial in their sound and found their stride with a series of singles that led up to the 2018 release of War Inside, their second EP. Songs like “Suffer” and “Payback” picked up steam on streaming platforms in 2019, setting the table for their powerful 2020 single “Uprise.”