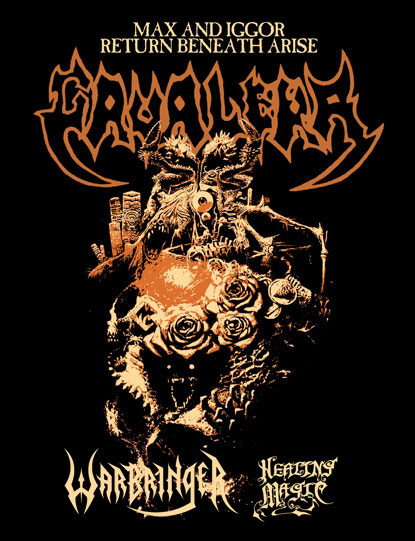 After doing it in South America in 2018 and Europe in 2019, Sepultura co-founders Max and Iggor Cavalera are finally bringing their tour of Sepultura material to the US this spring. The tour surrounds their previously announced appearance at Maryland Deathfest. Billed as the “Return: Beneath Arise” tour, the trek will find the brothers playing material from 1989’s Beneath the Remains and 1991’s Arise.

Max and Iggor co-founded Sepultura in 1984, with Max on lead vocals and guitar and Iggor on drums. Max left the band in 1996 after the release of Roots, and was replaced by Derrick Green, who remains Septultura’s vocalist to this day. Iggor remained with the band until 2006. Max and Iggor also played together in the ’90s side project Nailbomb, and after leaving Sepultura, Max formed Soulfly. After Iggor left Sepultura, he reunited with Max in the band Cavalera Conspiracy. In 2017, Max and Iggor did a tour performing Sepultura’s Roots.