Missy May I, Currents, Kingdom of Giants, Landmvrks 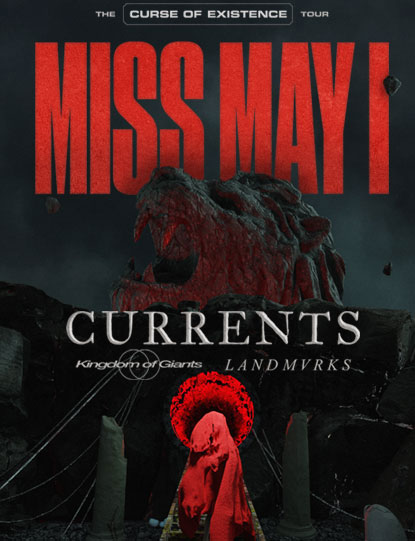 Troy, Ohio’s Miss May I came together in 2006 while their members were still in high school. Consisting of guitarists Justin Aufdemkampe and B.J. Stead, singer Levi Benton, drummer Jerod Boyd, and bassist/vocalist Ryan Neff, the quintet plays highly technical, driving metalcore. With searing guitar work and dual sung/screamed vocals, Miss May I quickly established themselves through a series of demo recordings, eventually landing a contract with Rise Records for the release of their debut full-length, 2009’s Apologies Are for the Weak. After spending a couple of years touring with bands like Carnifex, blessthefall, and the Devil Wears Prada, the band returned to the studio to begin work on its follow-up with producer Joey Sturgis. The result was their 2010 album, Monument, which reached number 76 on the Billboard 200 and was the band’s most successful record to date. Miss May I spent most of the next year touring, taking part in the Van’s Warped Tour as well as tours with We Came as Romans and Pierce the Veil. They finally settled into the studio in early 2012, and their third album, At Heart, followed later that year. The critically acclaimed Rise of the Lion dropped in 2014, with Deathless, their fifth studio long-player arriving the following year. 2016 saw the band leave Rise Records and ink a deal with SharpTone, joining a roster that included genre heavy weights We Came as Romans and Attila. In April 2017, Miss May I dropped “Lost in the Gray,” the first single from their much-anticipated sixth studio long-player, Shadows Inside, which arrived later that May.