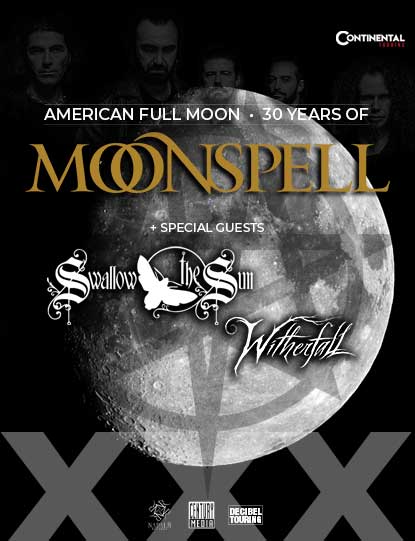 Linchpins in the fertile gothic metal scene of the 1990s, Portugal’s Moonspell became regional favorites with the releases of their first two albums. They took the European continent by storm in 1998 with their chart-topping third effort, Sin/Pecado. Employing a dark and doomy amalgam of steely guitar riffs, lush gothic textures, and harsh yet melodic hooks, the band have continued to find favor both at home and abroad with acclaimed outings like Darkness and Hope (2001), Alpha Noir (2012), and Hermitage (2021). Founded in 1992 by vocalist and sole constant member Fernando Ribeiro, Moonspell debuted on Century Media in 1995 with the black metal opus Wolfheart. The well-received Irreligious arrived the following year and saw the band pivot to a more goth-metal aesthetic, a stylistic choice that they would refine on 1998’s Sin/Pecado.
Read Full Biography