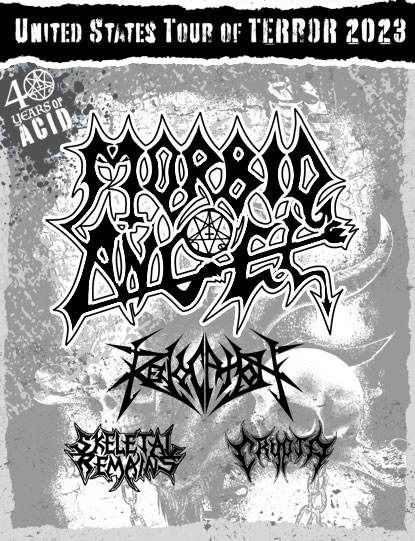 Groups like Venom, Mercyful Fate, and Slayer may have founded death metal in the early ’80s, but it wasn’t until such disciples as Morbid Angel came along at the close of the decade that the genre was pushed to its most extreme level, both musically and lyrically. Formed in 1983 in Florida, Morbid Angel (along with Death) would also help spearhead an eventual death metal movement in their home state, which would include such notables as Deicide and Obituary, among countless others.

From its inception, the group’s leader has been guitarist/songwriter Trey Azagthoth, who has successfully maintained that Morbid Angel stick to their guns throughout countless musical fads during their career. Over the course of their first few releases, 1989’s Altars of Madness and 1991’s Blessed Are the Sick (the latter considered by many as a landmark release in the death metal genre), the group’s lineup consisted of Azagthoth, vocalist/bassist David Vincent, guitarist Richard Brunelle, and drummer Pete Sandoval. With Brunelle bowing out of the group shortly thereafter and replaced by Erik Rutan, Morbid Angel had come across what would become the longest-lasting lineup of their career, showcased on such albums as 1991’s Abominations of Desolation, 1993’s Covenant, 1995’s Domination, and 1996’s in-concert Entangled in Chaos, before Vincent jumped ship and was replaced with Steve Tucker.