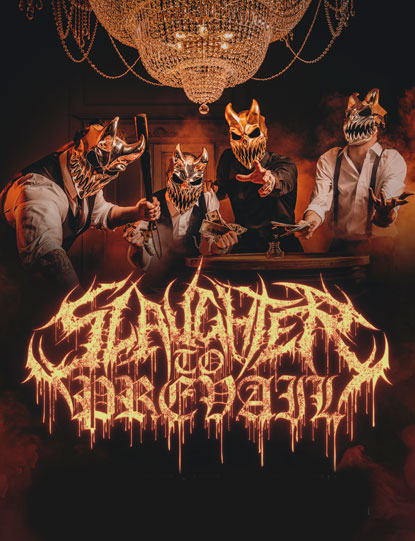 A globe-spanning deathcore trio who combine punitive extreme metal with blackened, groove-blasted grindcore, Slaughter to Prevail released their debut long-player, Chapters of Misery, in 2017. They expanded their fan base in 2021 with the dynamic and unrelenting Kostolom, which added nu-metal elements to their sonic arsenal.

Founded in 2014 by U.K.-based shredder Jack Simmons, Russian vocalist Alex Shikolai, and drummer Anton Poddyachy, Slaughter to Prevail issued their debut EP, Chapters of Misery, in 2016, which garnered a mountain of streams and downloads with the punishing single “Hell.” Singing in both English and Russian, their unique sound caught the attention of Sumerian Records, which quickly added the band to their roster. They released their uncompromising full-length debut, Misery Sermon, in 2017, followed in 2021 by the hard-hitting groove- and nu-metal-tinged Kostolom.