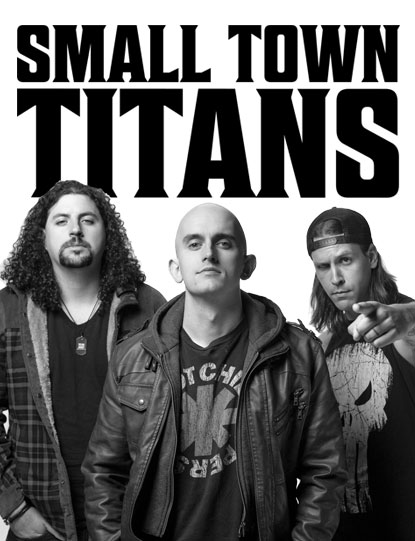 A hard-hitting and versatile power trio based out of Harrisburg, Pennsylvania, Small Town Titans draw inspiration from seasoned rockers like Deep Purple and Soundgarden, as well as contemporary decibel-makers such as Royal Blood and Highly Suspect. Employing a steely D.I.Y aesthetic — the group operates out of their own high-end, home-built studio where they constantly create and release videos, podcasts, cover songs, etc. — and known for their high-energy live shows, the trio was formed in 2011, and features the talents of bassist/vocalist Phil Freeman, guitarist Ben Guiles, and drummer Jonny Ross, all of whom met as students at Lebanon Valley College. The trio issued their debut album, Fight to Flight, independently in 2013, followed by a sophomore effort, Reflection, in 2016. The following year, the band released a cover of the anti-Christmas classic “You’re a Mean One Mr. Grinch” via their YouTube channel. It went viral a year later, garnering millions of views and charting on notable online music hubs. 2018 also saw the band issue the emotional single “Dragonfly,” a celebration of the life of vocalist Phil Freeman’s mother, who’d passed away the year prior.