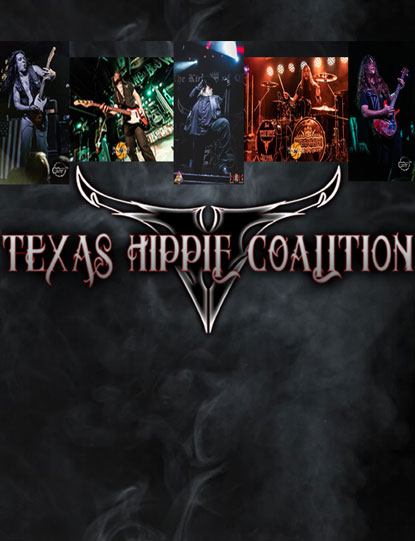 With a Southern rock-influenced brand of metal that pours punk, grunge, and pure melodic hard rock into the blender, Texas Hippie Coalition at their best sound like Molly Hatchet and Charlie Danielscrossed with Pantera chasing after the rock ghost of Lynyrd Skynyrd.

Their self-described “red dirt metal” is very much a product of gigging out of Chickasha and Denison, Texas, not far from the Oklahoma state line — Red River Valley territory. Formed in 2008, THC consist of Big Dad Ritch, John Exall, Wes Wallace, Timmy Braun, and Randy Cooper. Self-released debut Pride of Texas appeared in 2008, after which THC quickly gained steam, signing with Dallas-based label Carved Records. Rollin’, their Dave Prater-produced follow-up, arrived in 2010, followed two years later by Peacemaker, which rose to number 20 on Billboard’s Hard Rock Albums chart. Working with producers Bob Marlette and Skidd Mills, THC thickened up their already gritty sound on 2014’s Ride On, which marked their first appearance on the Top 200 chart. The red-dirt metal party train continued to chug along with the band’s fifth album, 2016’s Dark Side of Black, and again on the swaggering and aptly named High in the Saddle in 2019